I don’t think of myself as much of a TV watcher, but I’ve noticed I’ve been posting about TV shows lately. Go figure. I do sometimes have the TV on, especially if it’s a weekend my son’s off spending the weekend with his dad. In a weird way, the white noise keeps me company. So in this white noise fog, I’ve made an interesting discovery. Time machines do exist!!!

Tonight I was doing some work after my son went to bed, and I heard the familiar refrains of that popular sitcom “Cheers.” 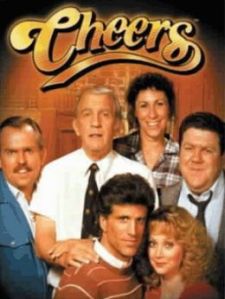 I was suddenly transported back to the 90s when I was married. I remembered a former co-worker I haven’t thought of in years, who was a huge Cheers fan. She even went to Boston to visit the place that inspired the series. I had a mini trip down memory lane.

As interesting as that was, it’s nothing compared to the feeling I get when I hear the theme song of “Too Close for Comfort.”

Hearing the theme song and watching an episode really takes me waaaaaayyyy back. For some reason it also makes me think of a cousin who lived down the road from us for a few years. We must’ve watched the show together at times. Otherwise, why does the show make me think of her? It’s more than just thinking of people, though, and reminiscing. I get a visceral feeling, almost like I’ve stepped back to a different time. It’s more tangible than just thinking back. It has to be the music, the sounds, and the way it imprints a feeling or sensation in some remote wrinkle of our brains. It’s an amazing feeling. Like an addict chasing a high, I’ve found myself flipping to the channels that play the old reruns, looking for that window to the past. Time machines do exist.

Filed under life, me, memories, TV

Tagged as Cheers, life, me, memories, sitcoms, Too Close for Comfort, TV